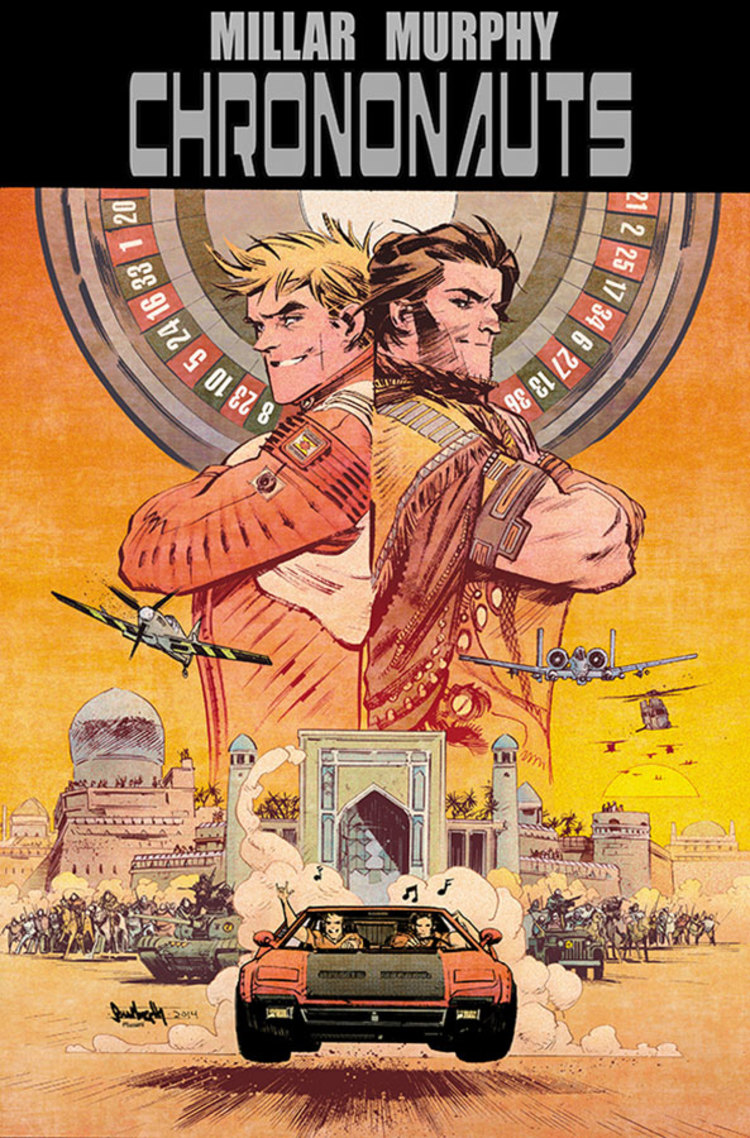 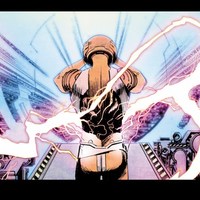 According to EW, Millar and Murphy have plans for "at least" two more "Chrononauts"miniseries once the first wraps.

MILLAR MAPS OUT HIS & MURPHY'S TIME TRAVEL ITINERARY IN "CHRONONAUTS"

After months of teasing a collaboration, the pair today announced "Chrononauts" -- a March-launching series from Image Comics that's equal parts homage to space race pioneers and time travel buddy picture. The comic follows Dr. Corbin Quinn and his right hand man Danny Reilly as they cross into the timestream for the first time in human history.

The latest in the Millarworld line of creator-owned titles from the writer, the series marks Millar's first collaboration for 2015. CBR News spoke with the writer about why he and Murphy are a perfect creative pair for this story, what science fiction and film influences set "Chrononauts" apart from most comics and what he's got on tap across the expanse of the next year.

CBR News: Mark, let's start big picture. "Chrononauts" is a time travel story first and foremost, so what was the attraction to that particular brand of sci-fi?

Mark Millar: It's an idea that's been in my head for years, that notion of the world watching as man steps back in time, two American Chrononauts wearing special suits as they step into the past on live television and plant an American flag in 1492, the day before Columbus arrives. Like they're marking their spot in time. It's an image I've had for a while, and the story really built itself around that. Plus, I love time travel. Growing up in the country that gave us "Doctor Who" in primetime television, time travel seems as normal and commonplace to me as the Brady Bunch must have seemed to people in America.

Why was Sean the artist to go with for this idea?

Sean and I have been talking about working together for ages. I've been kind of semi-stalking him, actually. I think he's the most exciting new artist around at the moment. Usually when I finish a comic, I just kick it under the bed or whatever, but with Sean, I keep it and pore over every panel. As fantastic as that it, it doesn't compare to actually working with him. Seeing something that might have looked nice in your head exploding in full, sound-surround Murphy-vision has been possibly the best experience of my career. There's about ten artists I work with regularly and am good friends with in real life, and they'll all testify that I've been embarrassing Sean with every page he sends by sending it out around the rest of the gang to coo over. Everybody's really excited by this guy. Plus, he draws great tech. And great action and cars, both of which are big features in this book.

At the start of the story, we're going to meet Dr Corbin Quinn. What makes him a compelling lead for the book, and who else plays into his high science story?

It's a buddy book. We rarely see these things in comics, outside of maybe "World's Finest." It's always a solo hero or a team, but that buddy thing has been great fun to write. Just two guys who really like each other. "The Man Who Would Be King" is one of my favorite movies, and it was an enormous influence on this, the notion of two best friends in an unusual place and obviously willing to do anything to save the other. Corbin Quinn and Danny Reilly are the world's first Chrononauts, and the idea is that they'll be remembered like Neil Armstrong and Buzz Aldrin. They're all-American heroes kids are wanting to be when they grow up. The idea of being able to go anywhere is quite a compelling one. The first issue has a series of variant covers, and we told the artists just to go crazy. All time and space is possible, which is fun as a writer or artist.

Of course, the team of adventurers concept is also a classic comics setup -- most notably in "Fantastic Four" which you've got some experience with as it is. How does "Chrononauts" build on that kind of "Challengers of the Unknown" feel?

You know what's weird about this? It's just a good time. I went to see "Guardians of the Galaxy" when I was starting this, and the tone was just identical. It's dangerous or action-packed when it has to be, but it's really just people who like each other and whom the readers will like in fun situations. The drama is intense and the danger is real, but "Guardians" had such a fantastic tone. That's absolutely the tone Sean and I have here. We've had a great decade of seeing how real we can make impossible concepts, but now is the time just to have a good time. Just as I left the cinema smiling after "Guardians," I like the idea of people finishing this book and enjoying it so much they just read it again.

One of the high concepts in the book is that it's about cutting edge science. Quinn and Reilly are going where no man has gone before. What's the attraction for you to tales about lofty innovation and high risk?

That's why I always choose comics over movies. Why I'll always consider myself a comic guy first and foremost. Budget doesn't matter. You can do anything in comics. A page of rippling through ten different time-zones costs just as much to make as two talking heads. This is why comics will always be better.

Sean is the kind of artist who can draw anything, and time travel is the kind of story that can ask him to draw just about anything. What are some of the things you're most excited to see him illustrate in the series?

I've actually seen quite a chunk of the series already, partly because Sean is so bloody fast and partly because we do long-lead on all Millarworld books now. I like to have the entire series all drawn by the time even the first issue comes out. The difference it's made it incredible. Wilfredo is just finishing the first issue of the "Jupiter's Legacy" prequel, and I'm just finishing the first volume even though #1 doesn't launch until Spring. "Chrononauts" is out in March, and Sean should be comfortably done with the first arc by the end of February. We have three of these planned. We have such a good feeling about this. We both feel this is going to go down really big. We've been feeling it as we've been doing it, which is always a good sign.

All the Millarworld books these days are fitting into the bigger world set up by "Kick-Ass." Are there any immediate connections folks will see between "Chrononauts" and any of the other books in the line?

This is also your first big, new book for 2015, right? How's your year in comics shaping up with this, the "Jupiter's Legacy" spinoff and everything else you've got cooking?

Next year's exciting. We've got "Kingsman: The Secret Service" hitting cinemas in February, "Chrononauts" launching in March and then the "Jupiter's Legacy" prequel in April. What I'm writing at the moment are the last two issues of "Jupiter's Legacy" volume two (which Frank Quitely starts in two weeks time when he finished the double sized issue #5), and we'll launch that towards the end of next year once he's got most of the art in the drawer.

There's going to be a bunch of new things launching in the second half of next year, but I don't want to talk about them until all the art is in. All I'll say for now is that the Millarworld site itself will be the first of the big news stories as we enter 2015. The whole thing being overhauled the first week in January into something nobody's ever really done before. This is all very exciting and what we've been working on this week, actually. Cinematically, we've got two new things filming next summer and, as long as we're all happy with a screenplay due at Christmas, hopefully a third picture shooting later in the year. Meanwhile, we'll probably have another three babies.

CBR received an advanced copy of Chrononauts #1 and gave it an excellent review, saying "
"Chrononauts" #1 showcases the talents of each contributor but also becomes a magnificent display of the possibilities inherent in successful collaboration."

EW has announced that writer Mark Millar teams with Eisner Award winning artist Sean Murphy for the latest Millarworld outing, "Chrononauts." The series, debuting in March from Image Comics, melds the mission of NASA with the concept of time travel. Colorist Matt Hollingsworth and letterer Chris Eliopoulos join Millar and Murphy for the four-issue series.

According to EW, Millar and Murphy have plans for "at least" two more "Chrononauts"miniseries once the first wraps.

Take a look at Murphy and Hollingsworth's cover for "Chrononauts" #1 below. 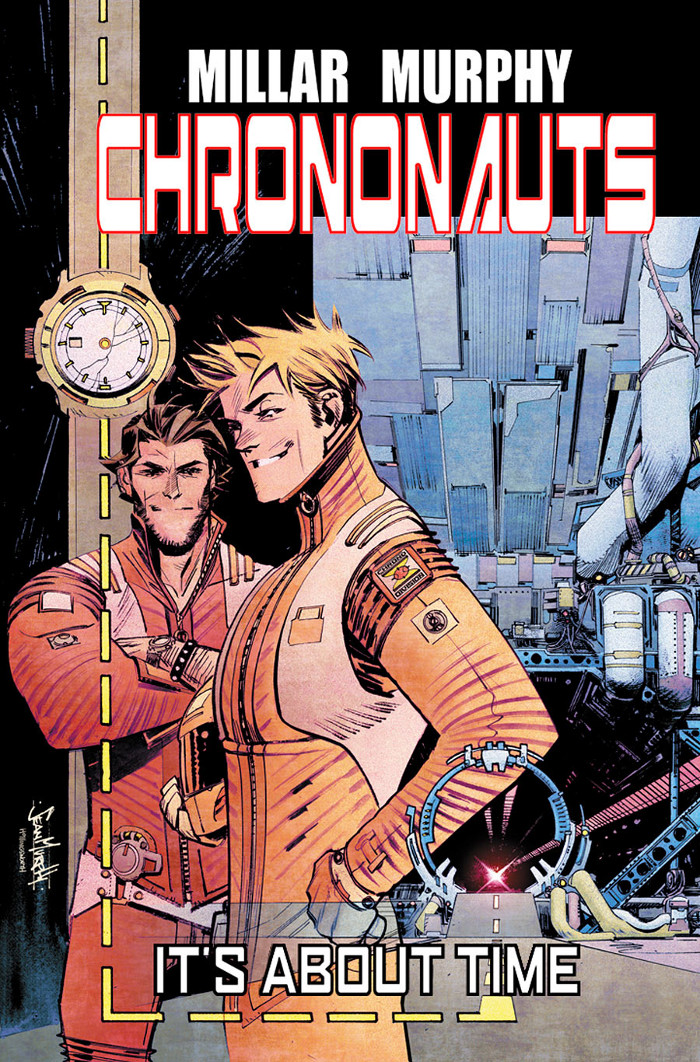