REVIEW: "Kingsman: The Secret Service" is a Summer Movie for Winter Audiences 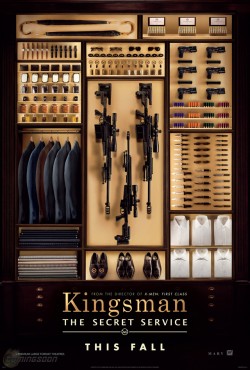 "Kingsman: The Secret Service" is a movie that defies expectations because it almost defies you to have any expectations. Lead Taron Egerton is a newcomer, Colin Firth is untested as an action lead and Matthew Vaughn is not yet a Big Deal Director. Though well received, "X-Men: First Class" didn't propel him into the spotlight the same way it did members of its cast, and his Hollywood films ("First Class" and "Kick-Ass," another Mark Millar collaboration) are different enough from each other that his voice is hard to peg. The comic the film is based on came and went a few years ago, mostly only making an impression with devotees of Millar and artist/co-creator Dave Gibbons.

On the other hand, "Kingsman" delivers thanks to Egerton providing a captivating turn and Firth proving to be an excellent action lead. "Kingsman" also cements Vaughan's style as a quantifiable commodity by acting as the bridge between the cartoonish hyper-violence of "Kick-Ass" and the precision of "X-Men: First Class." And, it also defies your expectations of what to expect from a movie released in February -- a time that is generally perceived as Hollywood's dumping ground.