Mark Millar on why he sent MPH to President Obama

When I was eight years old I had the Stars and Stripes hanging up in my bedroom. This isn’t especially strange, of course, except that I wasn’t American and actually grew up 5,000 miles away in a small industrial town in Scotland. Having the flag of a foreign nation draped over your bed is slightly eccentric, like a kid in China having a life-size poster of Greek President Karolos Papoulias on the wall. But such was the power of the American brand that I had to be a part of it. America was where Superman and Batman lived, and as soon as I was old enough I planned to go and work there.

Flash-forward three decades and I do. All those little home-made comic-books I used to put together eventually became my career and I’ve had my fingerprints over all the big Marvel and DC characters for the past decade and a half before striking out with my own company and creating books like Kick-Ass, Wanted and various other Hollywood franchises.

Superheroes have been my bread and butter my entire adult life and with superheroes comes a natural love of both Americans and Americana. I’m as familiar with their books and movies as anyone on either coast, as proficient in transatlantic Americanisms as anyone I’ve ever met and regularly commute for work to cities that, thanks to decades eating pic ‘n’ mix in my local cinema, feel almost more familiar to me than my home here in Scotland. But a couple of years back, on a book-signing tour that took me all over the US, I visited somewhere that really had quite a profound effect on me. On a trip to Michigan I took a drive to Detroit and saw the America that those superhero movies never talk about.

Now anyone who’s picked up a newspaper in the last few years will be familiar with Detroit’s problems so there’s no need to go over them in too much detail. The news that a large American city was filing for bankruptcy was shocking, especially one that had been described as the heart of industrial capitalism and boasted, just 50 years ago, one of the highest average standards of living on the entire continent. We’ve all browsed the pictures online of what’s been described as ‘ruin porn’, vast, beautiful towers, neglected, symbols of a prosperous past destroyed, 80,000 buildings abandoned and incongruous images of trees and wildlife where banks and offices had thrived a decade or two before.

But nothing compares to actually standing there and looking at it with your own eyes. Driving through the middle of Brightmoor was like being on the set of I Am Legend or The Walking Dead. How could the richest country in the world allow so many of its people to live in such abject poverty? Where were all those superheroes now?

Detroit, of course, is not unique in what looks from the outside like capitalism crumbling. That same book-tour took me through Arkansas and Kentucky and all those other parts of the country often described as fly-over states and where one friend told me he was giving up his car because he didn’t have anywhere to buy gas anymore. I know this sounds odd and such a small detail, but the idea that a town suddenly didn’t have enough people running cars for a gas station to exist struck me as apocalyptic. I couldn’t understand why a bigger deal wasn’t being made of this social and economic catastrophe right  on our doorsteps.

Except, of course, I do. It’s because it’s scary. It’s because it touches our lives in a way that poverty in other continents doesn’t. These are people who speak our language, who look and sound just like us, who watch Marvel movies andThe Simpsons and all the things we enjoy too, but the bottom has completely fallen out of their lives in a way that’s much too close for us to handle. People who had comfortable, middle-class jobs are now living in slum-housing and relying on food banks to feed their families once their welfare payments run out. It’s terrifying. No wonder we’ve all retreated into a fantasy land, watching men and women in brightly-colored spandex saving the human race over a satisfying 128 minutes. Basic escapism is why superheroes were invented. 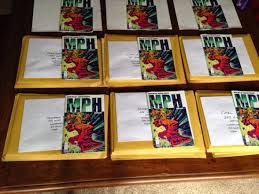